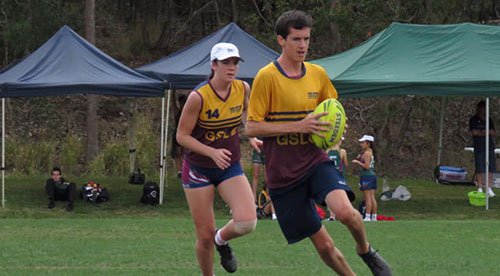 Touch is a fast and dynamic sport that is very popular at Good Shepherd. Students play from Under 10 through to Year 12 in boys and girls teams and as mixed teams.

Although only six players are on the field at one time, due to the nature of the game, teams usually consist of ten or more players. Limited physical contact makes touch an excellent sport for all age levels.

Good Shepherd has built a reputation of being a leading school on the Coast in the sport of touch. Many students have gone on to represent the Independent District and the Sunshine Coast. Jason McNamara, Australian player and regional coach, currently coaches the senior mixed team. Several past students also assist with coaching junior teams including Jack Carey who is current coach of the Sunshine Coast University Spartans. Mr Steve Carey and Mr Stuart Herriman have coached the Independent District teams at Regional Championships for several years. The College has close ties with the Noosa Touch Association and the Coolum Touch Association and keen players are encouraged to join these associations and also have the opportunity to play at Regional and State championships.

Good Shepherd senior teams are regulars in the Monday night mixed adult competition at Tewantin, and have become one of the top teams in the competition.

The highlight of the year is always the Queensland All Schools, which is the biggest schools touch tournament in the world running over five days. The open mixed team won six pool games to progress to the finals, a great achievement.

In Term 3, focus is on the SCISSA competition. Good Shepherd teams performed well as usual.

Open Boys - After a three year unbeaten run, the boys lost in the semi-final.